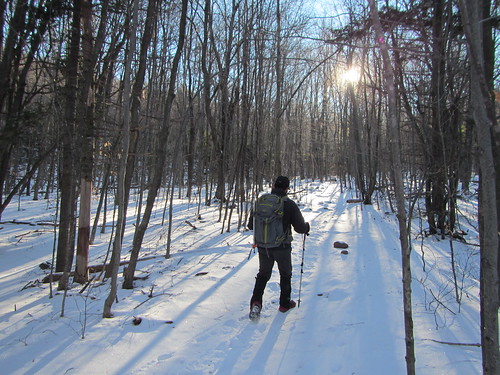 I had planned to hike Blackhead in winter at last year's Winter Weekend, but the hike was called off the night before. Now it remained as my final required winter peak.

On my summer hike of Blackhead, I'd done it with Black Dome and Thomas Cole as a shuttle hike. In my blog post about it, I'd written, "We took the steepest [route], starting up the Batavia Kill Trail to Blackhead. Unlike Windham, this trail was pure Catskills - rocky and steep. (Blackhead is also a required winter peak; that approach is not recommended in winter.)" Take a guess as to the route we took up Blackhead this time ...

Our leader had also warned that there might be some nasty icy parts and had brought a rope and an ice axe. As it turned out, we didn't need either. There was enough recent snow that the icy climbs had some traction.

We also lucked out in that it was few degrees warmer than the previous day - plus clear and sunny. There are several nice views through trees on the way up, even though it's evergreens from a much lower elevation than most Catskills hikes. The best view, though, is coming off of Blackhead towards Black Dome, with a clear view of Black Dome and Hunter.  (In the photo below, Black Dome is right up front, with Hunter off to the left, recognizable by its ski trails.)

We came out on the Black Dome Trail, back to Batavia Kill, a less rocky approach. Although I felt as though we were hiking more slowly than on the previous day's hike, we still were done quickly. The amount of snow was just enough to smooth out the rocks without impeding our path. 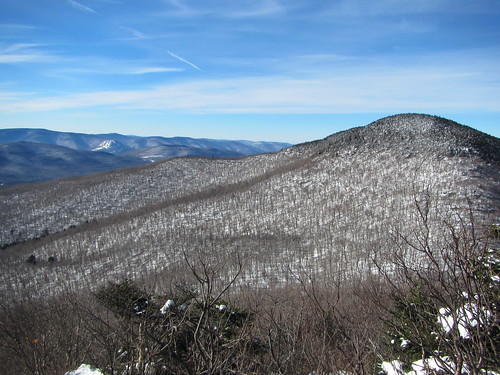 Posted by Eve Proper at 9:41 AM No comments: Links to this post 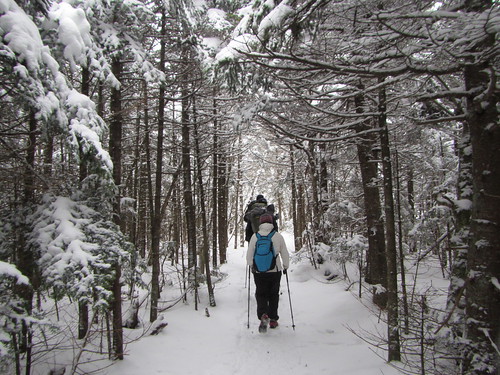 What do you do when a blizzard of epic proportions is heading towards you? Go to the mountains!

It sounds counterintuitive, but the Catskills were a better place to be this weekend than New York City. The snow blanketing the east coast reached only as far north as Poughkeepsie, and we made sure to get out of the city before it started falling. The Catskills already have snow, although much less than normal, and none of it fresh, meaning that driving and hiking was easy.

On Saturday I hiked Panther with the Catskills 3500 Club for the second time. Panther is one of the four hikes you need to do a second time in winter, and I'd already done that last year on the official last day of winter, March 21. I'd hoped to do my other climb in another season, but it was the only hike being offered on Saturday that I still needed. So I strapped on my microspikes and headed up.

The weather was bitterly cold, so there wasn't a lot of lingering. This is kind of a shame, as Panther has some nice views, most particularly at the Giant Ledge. (There is a view at the summit, but it's not as expansive as the Giant Ledge.) Still, even after a ten-minute pause at the top for a snack, I had to get moving again to get the chill out.
Posted by Eve Proper at 9:41 AM No comments: Links to this post 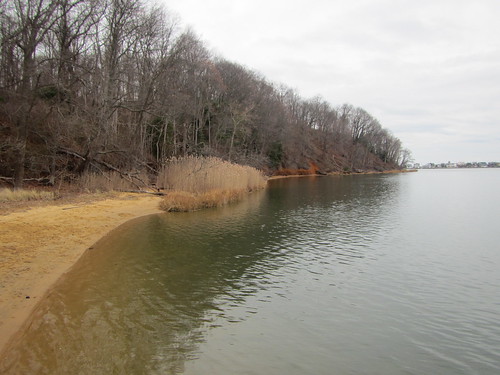 On Sunday I helped scout a hike for the NY Ramblers. We took the bus out to Highlands, New Jersey, and hiked through Hartshorne Park and then out to Sandy Hook.*

Hartshorne Park is a county parks with extensive trails. In addition to holly-filled woods and views of the Atlantic, it is also home to Lewis Battery, a WWII installation. This made for a variety of sights - and the holly (plus some laurel) made it greener than your typical local winter hike.

From there we walked to Twin Lights, a lighthouse with a small museum. Only one of the two towers is open, except during the annual Lighthouse Challenge in October. One of the two Fresnel lens is on display in the nearby powerhouse.

The last leg of our hike took us on a State Route 36 bridge to Seabright/Sandy Hook. We only walked a short way down the beach, in part because there was a brisk wind, and in part because we thought it was later than it was. I have to admit I wasn't sorry to turn back - if you ever want to turn me mad, just trap me on a ceaselessly windy beach.

We took it a little easy, hiking about 10 miles. The final hike will likely be longer, as it's simple to add more miles either in Hartshorne Woods or along Sandy Hook. I'm uncertain of the elevation gain, since the battery on my watch was going, but my guess is about 300 feet; there were some hills in the park, but nothing killer.

*If this sounds familiar, note that this is not the Sandy Hook of recent shooting notoriety, but a National Recreation Area.
Posted by Eve Proper at 10:17 AM No comments: Links to this post


This year, alas, I was sorely disappointed in several books that I was looking forward or that came highly recommended. Also, there are plenty more books that I liked and would recommend - and some that amused me for a moment but are hardly memorable.
Posted by Eve Proper at 12:00 AM 2 comments: Links to this post