A scouting hike in Harriman

Last weekend I headed up to Harriman to scout a hike I'm leading in October - my third try. Thankfully, I made it this time, even if the weather had returned to being unpleasantly hot. 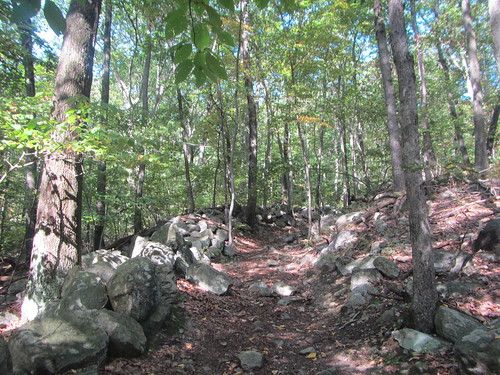 The hike enters Harriman from an entrance I don't think I've used before. It's a much gentler entrance than most of them, which head straight uphill. As you can see above, it's a hill, just more modest.

My hike was slower than the actual hike is likely to be, mostly because I had to do some route-finding when it came to old roads. So I explored more side trails, which took extra time. 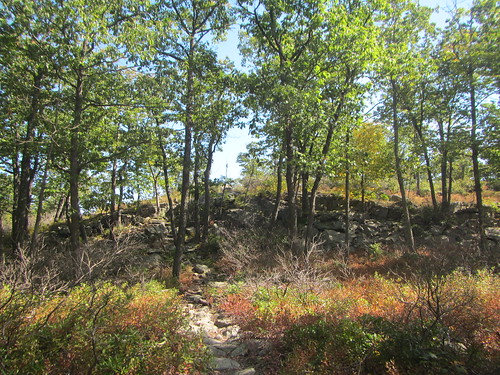 Unfortunately, in the afternoon I missed a turn off a road back onto a trail, and found myself at Pine Meadow Lake. It's very pretty, but not where I was supposed to be. I didn't feel like retracing my steps, though, instead opting to take an easy way out. 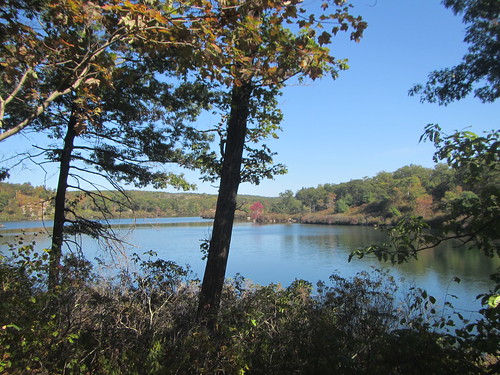 Well, mostly easy. It was pretty flat, but part of it was on a bouldery trail following a creek. 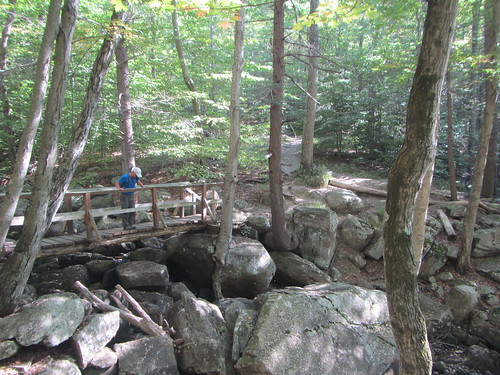 The downside of this hike is that there is a two-mile roadwalk at the end. It's not particularly interesting, and I wouldn't love doing it in the dark. Here's hoping the official hike doesn't have to!
Posted by Eve Proper at 5:38 PM No comments: Links to this post 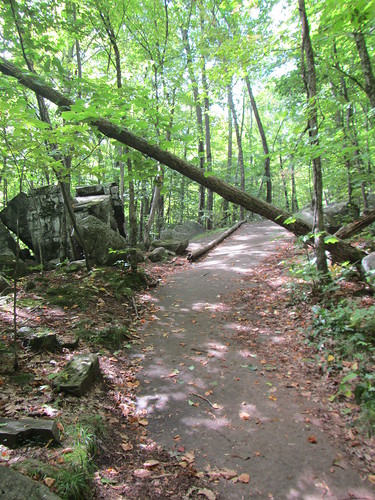 My final hike was chosen strategically; I wanted to do a fire tower on the southern end of the Adirondacks, so it would break up the drive home. Hadley and Spruce were the top two choices, and I chose Hadley as it was slightly harder.

The first mile of trail looks just like the photo at left - as if the trail is paved. It's not, of course; it's just bare granite. It makes for good footing, as there is almost no scrambling. But it's also quite steep, with a good chunk of the 1525 feet of elevation gained in this portion. The trail then abruptly levels off, and the rest of the .8 miles intersperses flat areas and modest hills.

There are a couple of viewpoints near the top: 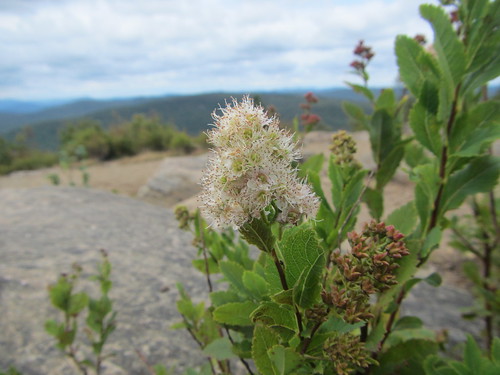 I climbed the tower, although the cab was closed, and as promised there were 360-degree views. Despite the trail being busy, I had the rare good luck of having the summit to myself. 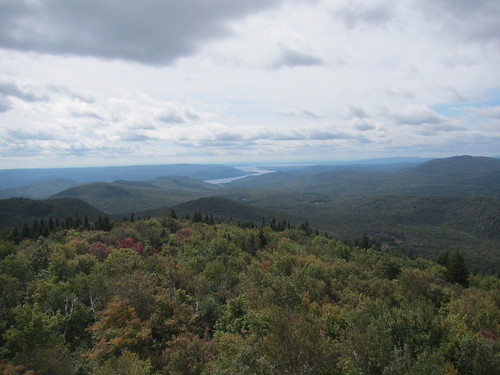 Afterwards, I got back in the car and headed home.
Posted by Eve Proper at 8:30 AM No comments: Links to this post

On Friday, I had tried to get to the trailhead for this hike and had given up. It was my fault for being lazy about gathering intel: I knew one turned on Lang Road and went "a ways" down to park, or went "a ways" further and parked at the actual trailhead. I hadn't bothered to figure what those distances actually were, and the trail isn't on the National Geographic maps. Plus, I had no cell signal.

I turned onto the gravel road and went past the houses. The last few had signs like "don't park here, park down the road." The gravel road was hilly but fine, until I got to a short, steep section with some washboard. Not knowing if it would get worse, I turned my fragile little rental car around.

On Sunday morning, I went back with better info. The trailhead was two miles down, folks said, and the road wasn't that bad.

Of course, that one hill turned out to be the only questionable part of the road! Oh well - I reached the cemetery, the real start of the hike, just the same. 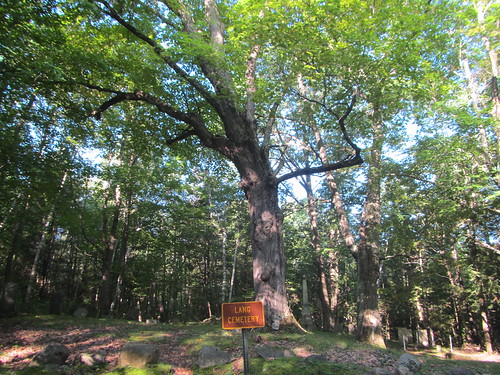 The rest of the trail is an old dirt road no longer passable by cars. There is a modest hill, then the trail ends at a magnificent view. 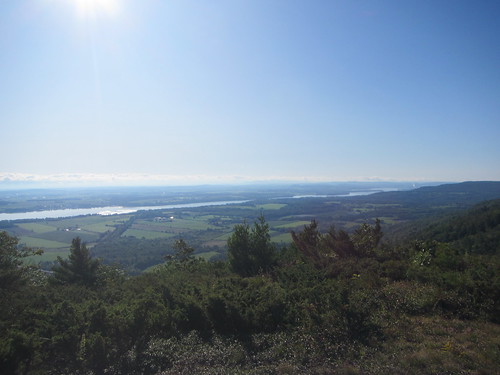 I did this hike in something of a hurry, and I didn't stay at the viewpoint too long. Bugs had been bombarding me the entire way, and I was tired of things bouncing off my head.

So this was the completion of the Moriah Challenge. None of the four hikes are very hard. Belfry offers the best views, being a fire tower, and a very short hike. Cheney and Big Hollow also have good views. Crowfoot Pond is the longest, so one could do them all in one day if one was even modestly determined to do so.
Posted by Eve Proper at 8:30 AM No comments: Links to this post

My weekend continued with Saturday's hike up McKenzie Mountain, my final (and hardest) hike in the Saranac 6. Now, I knew going in that the weather wouldn't be ideal. But it was my only full day in the Adirondacks, and I wanted to make sure I had the time to finish. 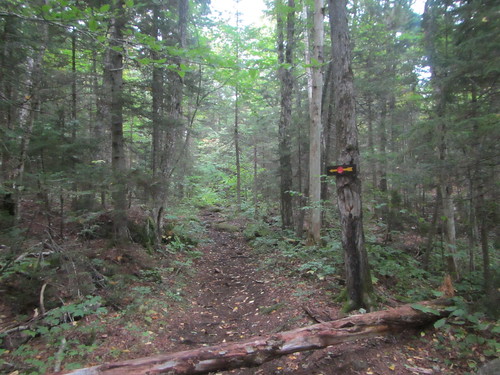 Sure enough, it was spitting drizzle in the morning. I elected to sleep in an extra hour, since the forecast improved to merely cloudy at 10.

There are two routes up McKenzie. One starts at a trailhead shared with Haystack, then splits. The other starts on the Jackrabbit ski trail, requiring one to turn onto the McKenzie trail a bit after the split. The former is great if you're going to bag both in one day, but it starts about 400 feet lower in elevation and is more mileage, so I elected for the latter.

The ski trail was great - wide, flat, and smooth. "Flat" here refers to the terrain, not the slope; much of it was uphill, albeit in a modest, tasteful way. But after the turn, things changed dramatically. The trail becomes quite rocky and scrambly. Now I love scrambly trails, although things are a bit messier when the rocks are damp. A lot of the trail looked like this: 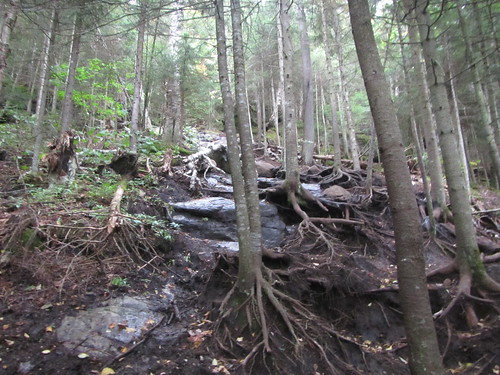 At one point, the trail bends, and two other side trails go to viewpoints (not that there were any to be had in the weather). I got badly turned around there, which I blame on no one but myself. But after wasting time trying to figure out which way to go, I finally forged on. (The only defense I have is that, because it was at the top of a false summit, it wasn't something as obvious as "go uphill.")

I did reach the summit, to be shortly joined by part of a group from upstate. The summit itself is hard to miss, what with the sign, although there is no view directly on top of it. 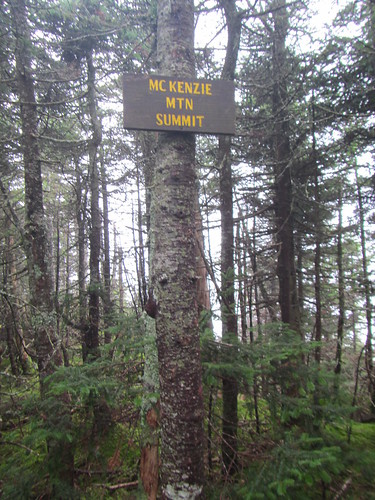 Then I returned the way I came, minus the turnabout. And as I got about a third of a mile from my car, the sun came out.

So I drove into town, and rang the Saranac Sixer bell. 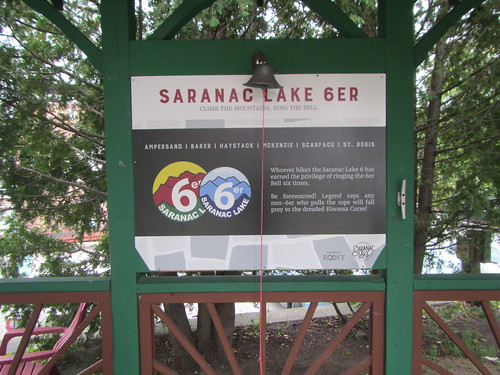 Posted by Eve Proper at 8:30 AM No comments: Links to this post 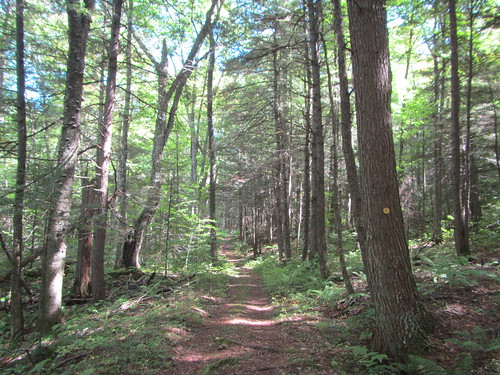 On a weekend trip to the Adirondacks, I planned to finish off the Saranac 6 and the Moriah Challenge. My initial plan was to do the final two Moriah hikes on Friday.

I started with Crowfoot Pond. It's the longest hike in the Challenge, although it's almost entirely flat, at 2.5 miles each way. The above photo shows what most of the trail looks like.

It dead-ends at Crowfoot Pond, seen below. (A private road continues on.) The pond itself is nice, but the trail doesn't have a great angle on it. Still, it was pretty. 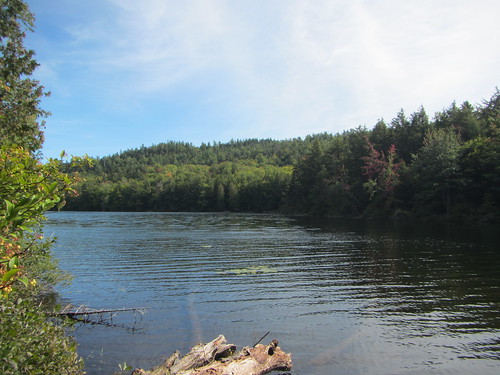 Afterwards, I tried to drive over to Big Hollow/Coot Hill, which is the final hike in the challenge, but was stymied, which you'll get a report on later.
Posted by Eve Proper at 6:42 PM No comments: Links to this post

Well, today was the second attempt at doing this scouting hike and failing. The smart day to do it would have been Saturday, which was beautiful. Sunday I had to work. The forecast for today was rain, but it didn't look that bad initially. But by this morning, it was an 80% of rain and thunderstorms, and I didn't want to be stuck out in the middle of Harriman if it got ugly. I am something of a weather wimp when it comes to day hiking alone. If I'm backpacking, I'll keep going, barring unsafe conditions (so, for example, I opted to wait it out instead of going up the Long Trail's Burnt Knob with major storms coming in). But if I'm going out alone, I'll probably be lazy. 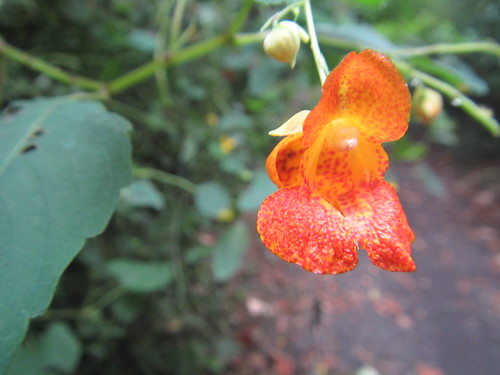 So instead, I took the subway up to Van Cortlandt Park. I walked up the Putnam Trail and onto the South County trail, then around the east side of the lake. It started raining as I rounded the north side of the lake, so I bailed out on a bus. It was 5.6 miles, mostly flat, although the elevation gain came out to a surprising 400 feet. 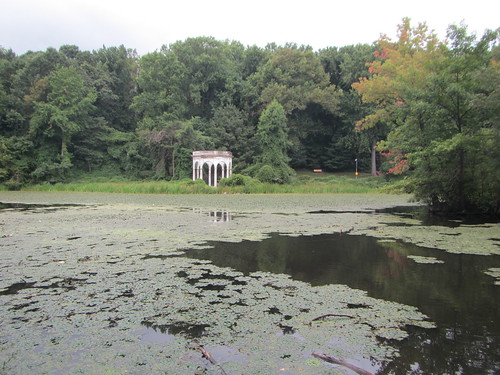 Posted by Eve Proper at 1:20 PM No comments: Links to this post