I was supposed to spend last weekend backpacking in the White Mountains. However, the trip got postponed due to weather - a cold, snowy front was coming through. Yes, one expects to be cold in the Whites in winter, but -20 is pushing it, especially for a group tour.

I still had non-refundable plane tickets to Manchester, NH, though, giving me the choice of losing them or throwing good money after bad. What the heck, I said, and decided to go anyway.

Since I didn't rent a car, my entertainment was limited to places I could walk. But, hey, I'm a hiker! So I saw a good portion of the urban trails during my time. 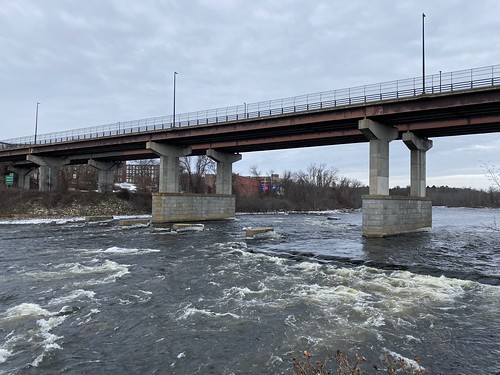 Up first was the Heritage Trail, a very short trail along the Merrimack River. The proper trail is only .9, although of course one can walk further on local streets. The old mill buildings foreclose river access in places, however. The photo above shows the view from the access point near parking. 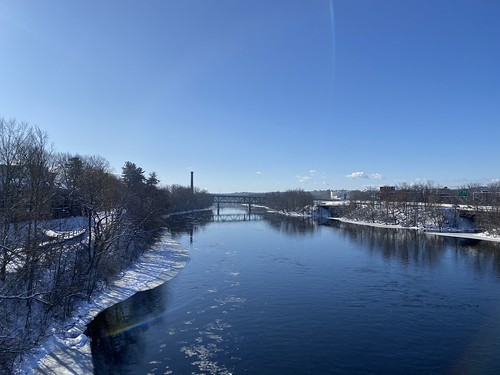 There is another section of this trail to the south, which I did a bit of the next day on my way to the Hands Across the Merrimack pedestrian bridge. It had snowed the previous night, and of course the trails were not plowed, upping the difficulty level. The photo above shows a view from the bridge. 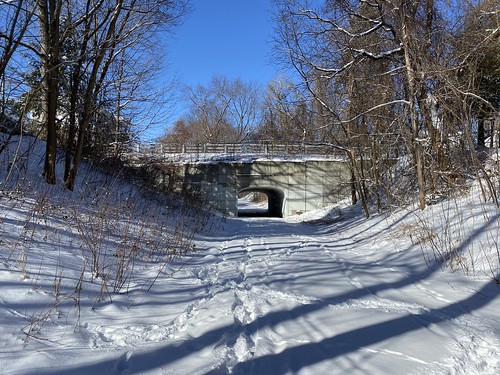 Once across the bridge, I was on the Piscataquog Trail (above), which I followed in its entirely (2.1 miles) to the Goffstown Rail Trail (below). It's 5.5 miles long, but I only did a portion of it, just over a mile. Volunteers had shoveled out a bit of the Piscataquog Trail, but otherwise it was all snow. (Snowshoes would have been ideal, but no one else I saw out had them either.) Both trails follows the Piscataquog River, although in some sections it's not within view. 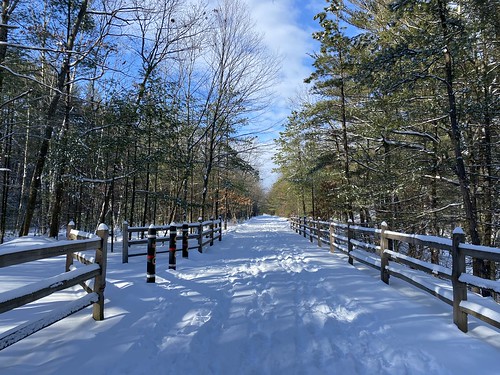 Additionally, Manchester boasts the South Manchester Rail Trail and the Rockingham Recreational Trail, both of which would require a car from downtown. As it was, I took a Lyft back from the Goffstown Trail instead of returning on foot.

P.S. I stayed at the Ash Street Inn, which is more upscale than I usually go, but it was a nice choice, and located within walking distance of downtown attractions. Would recommend.
Posted by Eve Proper at 9:34 PM No comments: Links to this post

Hiking in the Hudson Highlands

Yesterday's Ramblers hike was a goodbye to one of our long-time members who is moving away. That, combined with unseasonably high temperatures, made for a big turnout. 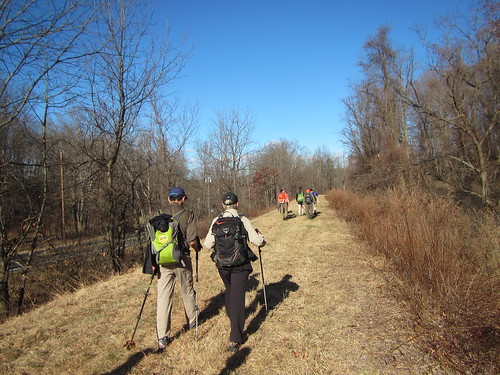 Part of the hike was along the Catskill Aqueduct, which brings water to New York City. But the second half was hillier. 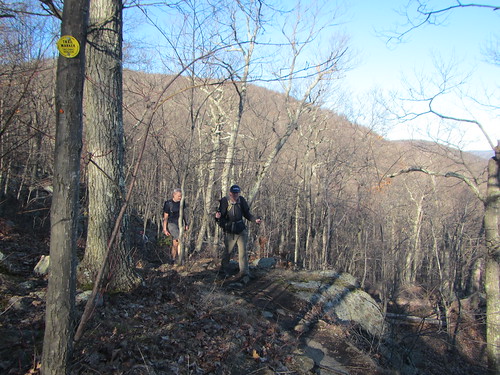 The total distance was just over 13 miles, with about 1700 feet of elevation gain.
Posted by Eve Proper at 7:43 PM No comments: Links to this post

The first time I saw the fire tower at Marcus Garvey Park* was on an urban hike with the Ramblers in 2012. The tower looked very cool, but it was disappointing to see the condition it was in. It was in this sad shape, of course, because New York quite shamefully spends more money on parks, infrastructure, etc. in neighborhoods that are white and/or well off. 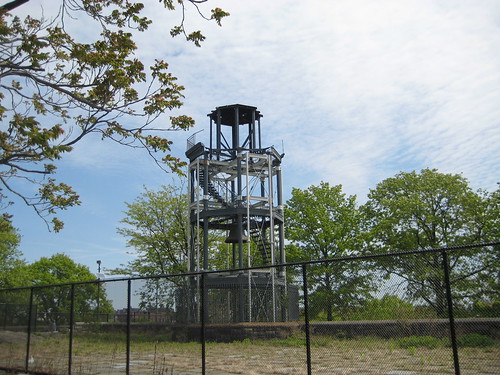 However, since then, locals led a charge to get it restored. You can read about it here.

I recently stopped by the park to see it, but the tower itself, while beautifully renovated, was closed to climbers. 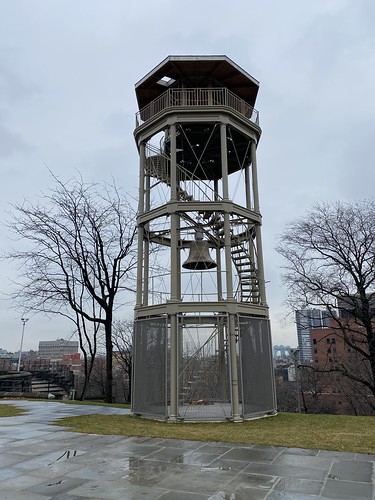 The parks department does offer regular visiting hours, though, where a ranger is present and the tower is open. So I took K with me on a visit to the top yesterday. 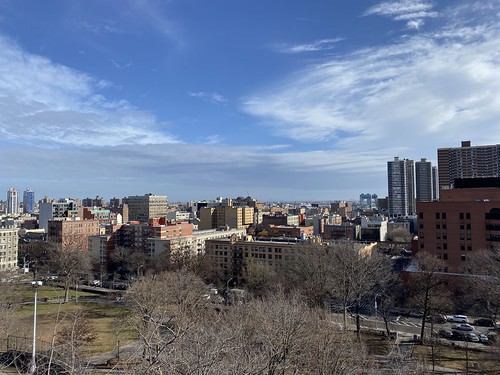 The above photo is facing towards Queens and Brooklyn. To the northwest, one can see the GW bridge. It's a nice view! They also let you ring the bell. (This might be one reason hours are restricted - otherwise, people could toll the bell any time.)

*This tower is also called the Mount Morris Fire Tower, because that's the name of the neighborhood. However, there is also a former firetower upstate on a hill called Mount Morris. These are two totally separate fire towers with no connection.
Posted by Eve Proper at 7:35 PM No comments: Links to this post

Hiking in the new year

My hiking club has an urban hike on new year's day every year, which I try to make when possible. This time, I had initially intended to be hiking in the Catskills instead, but that hike required an earlier start than I liked, so instead I joined the Ramblers in Rambling around the Bronx. 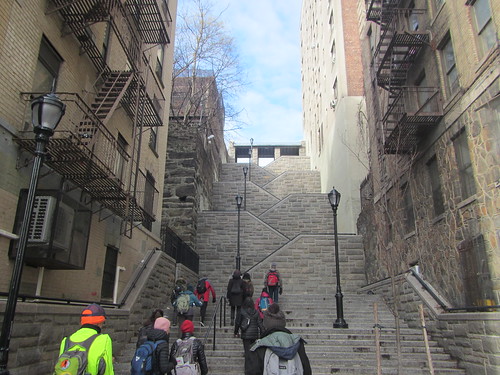 For the second year in a row, we walked the step streets (and other steps, and ordinary streets) of the Bronx. The official hike was 13.75 miles, but I walked a few extra, just over 17. Since we went up a lot of stairs, but down a lot of others, the elevation gain was 1,473 and the loss was 1,397.
Posted by Eve Proper at 9:58 AM No comments: Links to this post

I was wondering if I could take any interesting walks while at home, and I found the Build Lebanon Trails website, which describes current and future greenways. During my visit, the fam did two of the most scenic local walks. 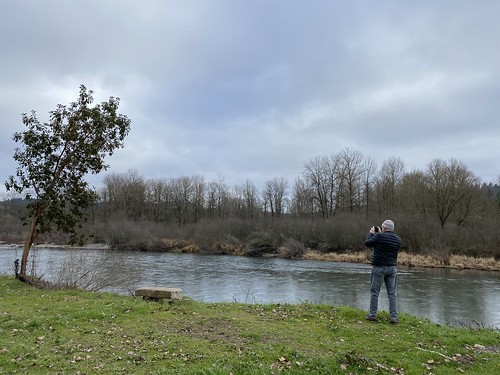 The first of these was Marks Slough, starting at Had Irvine Park. It's just over two miles of paved, flat trail. Mostly, it's pretty, but there are some spectacular views as it passes by the Santiam River. 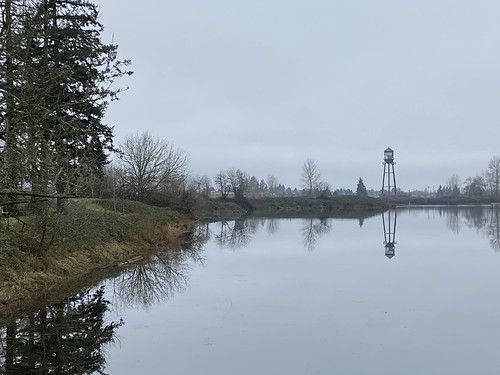 The second was a walk on the North Shore and Island Loop Trails by Cheadle Lake. Again, it was flat, although sections were unpaved, as we walked a bit over 3 miles. If one covered every bit, it would be more like 4.

The lake is supposed to be good for bird watching, and we saw geese, ducks, a heron, and an egret. Also, of course, the lake was pretty, and the North Shore trail was on a narrow strip of land between the lake and the canal.

Many of the other trail sections that we skipped are shorter, or cross more streets. You could piece together a much longer walk if you wished.
Posted by Eve Proper at 12:05 PM 1 comment: Links to this post