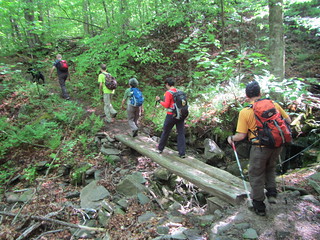 For the final hike of my long weekend, I hiked Fir and Big Indian with the Catskills 3500 Club. Both peaks are bushwhacks, but Big Indian only technically - an easy herd path of .25 miles connects it to a trail. Both peaks are also viewless.

Starting at the Biscuit Brook parking area, we hiked up the trail just past the shelter, then diverted into the woods, up to Fir. From there we bushwhacked over to Big Indian - a fine piece of navigation over the slender ridge between them - and hiked out on the trail back to the parking area.

The trail was pretty, if there was nothing spectacular. However, the weather was hot and humid. None of us were quite ready for summer yet, and several members of the group were getting quite bitten up by mosquitos. 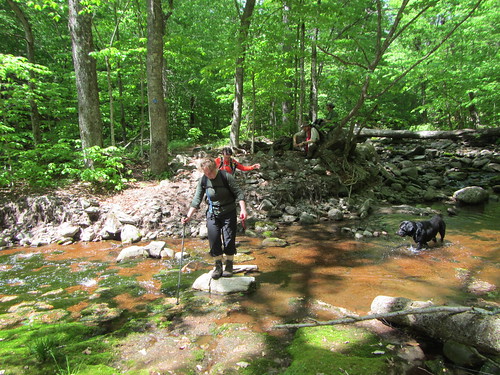 Posted by Eve Proper at 1:27 PM No comments: Links to this post 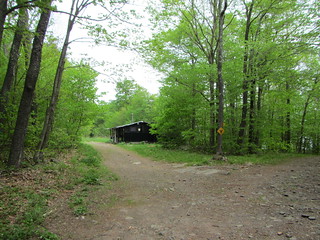 Bearpen and Vly have the distinction of being the only two 3500 peaks that are outside the "blue line" that bounds the park. Often done together, the two are technically not trailed peaks, but no one could possibly call them bushwhacks.

I hiked them with another aspirant. If you want to do both peaks together, start from Halcott Mountain Road (route 3) to either the north or south - it is unpaved in the middle and not suitable for ordinary cars. We chose to approach from the south, and the hardest part of the hike was finding the trailhead: Route 3 is not consistently marked and signed.

Once we finally found the trailhead, we parked and headed up Halcott Mountain Road to the junction shown above. To the left is the snowmobile trail that leads to Bearpen. To the right is the road. Perhaps 25 feet down the road is a trail off to the right that leads to Vly. 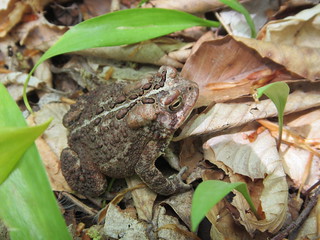 We went up to Vly first. A canistered peak, it doesn't have any real views. At some spots, you can turn around and see Bearpen behind you through the trees. Even though the trail is unofficial, it is marked with blue paint blazes. It's steep but otherwise unremarkable.

After Vly, we headed up to Bearpen. All the way up the roads and snowmobile trails, we saw a great number of toads, which was fun. The snowmobile trail was unsurprisingly easy to follow. Now, that said, we wanted to take a shortcut we'd heard about that cut some time off, but we couldn't figure out which side trail it was. (I was told afterwards it's the one with the "DANGER" sign at the lower end.) But if you stick to the snowmobile trail, you can't get lost. 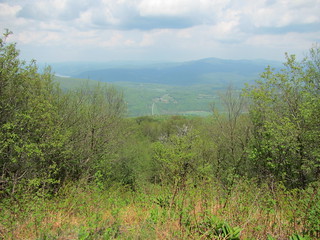 Bearpen had a brief life as a ski hill, and at the top you can see the remains of the lift as well as some other old equipment, including a car. There is a nice view at what I presume was the top of the run.

I don't think I'd seriously consider any of the other approaches unless I was doing something like the grid and needed variety (and that's not going to happen). Coming from the north adds substantially more elevation gain, and the other approaches don't allow you to easily do both.
Posted by Eve Proper at 2:42 PM No comments: Links to this post 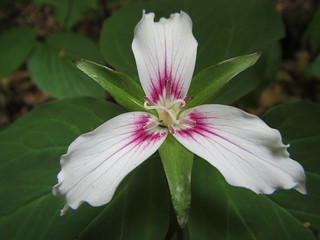 I was a little nervous about hiking Kaaterskill, since it was the first of the 3500 that wasn't entirely an official trail that I was doing alone. It's not a true bushwhack, but there was always the potential I wouldn't be able to find my way.

I chose to approach from the shorter route, Plattekill Clove in the south. The beginning of the hike is on a true trail, part of the Long Path and also a snowmobile trail. Officially, there is a juncture that takes you south to another snowmobile loop, and from there an unofficial trail heads across the summit and down the other side, reconnecting with the snowmobile loop.

However, being lazy, I decided to take the shortcut trail that has been made to the inner loop, and from there proceed north to the summit. (I'm not actually sure that it's shorter, though.) I was worried I wouldn't see the shortcut, but it was hard to miss. It was mostly easy to follow, aside from one confusing spot, but then it popped right out onto the inner loop. I followed it counterclockwise, again worrying I wouldn't see the unofficial trail to the peak, but again it was obvious. The trail itself does actually have blue blazes. 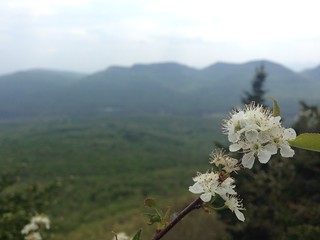 The trail up the peak is steep and requires scrambling, near-vertical in spots. It takes you up to Hurricane Ledge. If I remember right (and I hope I don't), someone said there wasn't much of a view from here, and that's not the case at all! You can see Twin, Sugarloaf, and Indian Head across the valley.

From Hurricane Ledge to the summit is a more reasonable walk rather than a scramble. There is no canister, but I found a geodetic marker. I gave a brief thought to crossing the peak and coming back the proper way; that thought died when I couldn't find the trail, just one to another ledge. I went back the same way I came.

Do this hike on a day with views, and when it's dry - you would not want to scramble up the rocks when they're wet. If I were to do it again, I'd loop around to the north properly, and also perhaps hike out to Huckleberry Point. My time was limited, though, due to an afternoon start.
Posted by Eve Proper at 2:02 PM No comments: Links to this post 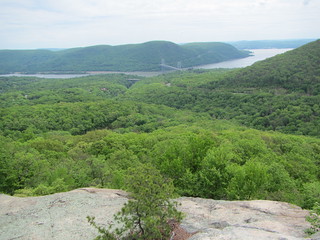 I'll be leading the annual Torrey Memorial hike for the Ramblers this fall, and I decided to go ahead and scout it now. I'd already planned the route, but I wanted to make sure it would work.

The only rules for the hike are that you have to go to the memorial, which is at the northern edge of Harriman State Park. Since I've been wanting to go to Popolopen Torne, my plan was to go in via Bear Mountain, through the gorge and up the torne, to get to the memorial. This adds a time constraint, because the Bear Mountain bus schedule leaves you under 7 hours to hike.

My friend and I dawdled a little bit at the beginning, taking photos, looking for birds, and taking in the scenery. Popolopen Gorge is quite scenic although hard to photograph, especially once the trees are leafed out. Then the going was slow up the torne; it was not only steeper than I realized, but it also required a lot of rock scrambling. That's always fun, but it's not fast. The view near the summit, of the Bear Mountain Bridge and Anthony's Nose, is spectacular, as you can see in the photo above. At the actual summit is a memorial to fallen soldiers and a view of West Point land. 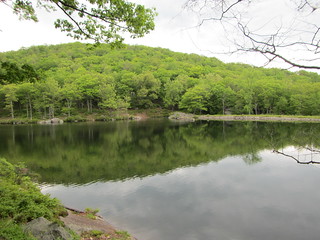 After descending, we continued on to Queensboro Lake via a mostly flat trail. At that point, we realized we really needed to hike faster and proceeded on to Turkey Hill Lake (second photo), and uphill to the memorial. The memorial is hard to miss, being carved right into the rock of the trail, and is another site for great views.

We had to hurry back, but we were taking a shorter route, back past Queensboro Lake but then over the parkway via the 1777 and SBM trails - both of us experiencing flashbacks to the SBM end-to-end! Aside from two small hills, the return hike is mostly flat or downhill. Also, while it is pretty, there is little scenery so grand on this section you simply must stop.

I hope that the leaves will still be turning when we return at the end of October; of course, if they're off, we'll have even more clear views in the gorge. It should be a great hike, although I'll try to keep a more even pace.
Posted by Eve Proper at 10:39 PM No comments: Links to this post 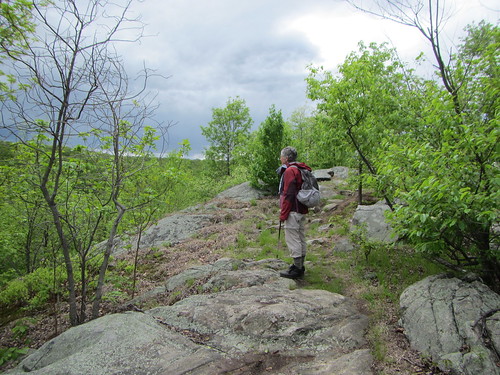 Sunday's Ramblers hike was a little bit of a departure from the usual, in that it was nearly all on trails, but not on official trails. We followed old roads, gas lines, and unmarked trails, with a very small amount of easy bushwhacking. I thought I had never been here before - until we reached the old water tower and so-called "castle," which I remembered from a previous Ramblers hike.

I was surprised to find the hike as interesting as it was. At one point we wandered through an area with many remains of appliances, including a tricycle in a tree and two buses. We also saw some attractive lakes and ponds. And thanks to the gas lines, we took in some nice, open vistas.
Posted by Eve Proper at 5:41 PM No comments: Links to this post

A stroll to New Jersey 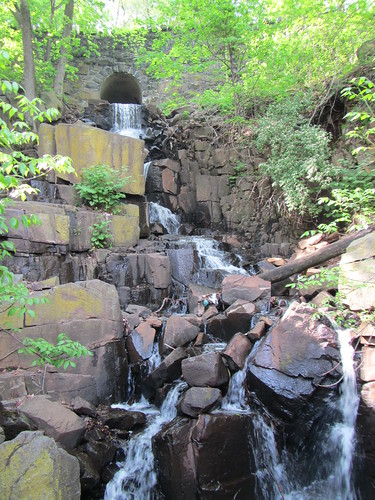 This was a short hike, across the George Washington Bridge, up along the Palisades to the Dyckman Trail down to the shore, and along the shore back to the bridge. My hiking companion was keeping an eye out for birds, so there was a great deal of stopping to peer through binoculars. Alas, the birds don't typically stick around for photos, so what you see here is a waterfall that runs down the Palisades.

We stopped for lunch at the cliff's edge via a side path I hadn't taken before. Remnants of an old antenna lay nearby. Near the end of our meal, there was some movement in the bushes - a young red-tailed hawk. At first, we thought it was getting its own lunch, but it seemed to be practicing, pouncing repeatedly. That was a very cool thing to watch up close!
Posted by Eve Proper at 5:52 PM No comments: Links to this post

Preparing for the the Long Trail 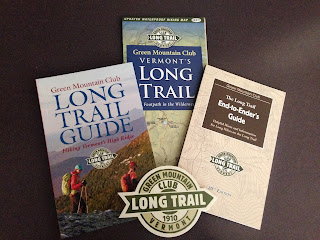 I've been spending some quality time with these guys, planning for a Long Trail thru-hike this summer. The Long Trail is a 272-mile* trail that runs the length of Vermont, coterminous with the Appalachian Trail at the southern end.

This will be my longest backpacking trip so far. I'm patching a few empty spots in my gear chest (for example, a water filter), but mostly I have the equipment. It's planning resupply points and figuring out how long it will take that's the challenge.

This won't be my only hiking adventure of the summer, but it'll be my biggest.

* Mind you, you can't just hike 272 miles, even assuming you never deviate to a side trail or wander into town for food. The southern terminus starts at the state border with Massachusetts in the middle of the woods, so it's a minimum 3.3 miles in; it's the same at the northern end, except the border is with Quebec and the mileage is 1.1. So really, 276.4.
Posted by Eve Proper at 9:54 PM No comments: Links to this post 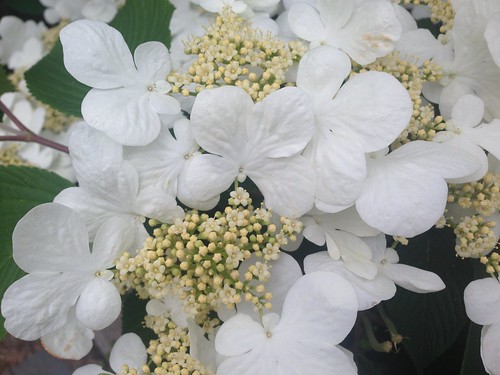 Posted by Eve Proper at 7:47 PM No comments: Links to this post 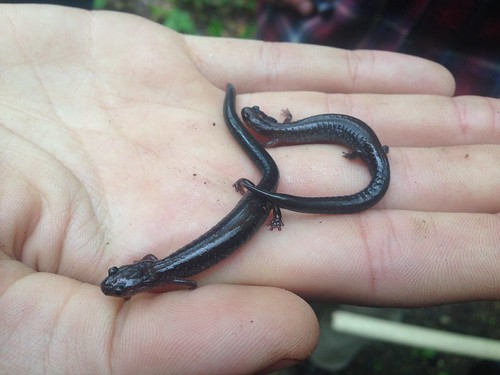 The first Saturday of the month is Van Cortlandt Park trails crew day, and this month we dug out some drainage ditches that had filled up. While we were out, we saw several of these little guys.
Posted by Eve Proper at 6:55 PM No comments: Links to this post