On day 2, we found out why people traditionally do this hike east to west, as we were. Day 2 was not easy, but it only goes (fully) over one 3500 peak and gains 3,500 feet of elevation.

Mind you, it doesn't start off gently! The day begins with a climb out of the clove up towards Hunter. This was my very first Catskills hike in 2014, when I was just recovering from shoulder surgery and beginning hiking again, and it still wasn't easy now. In fact, I failed to get any decent photos on the climb that show its difficulty, so here is a photo of a late trillium instead. 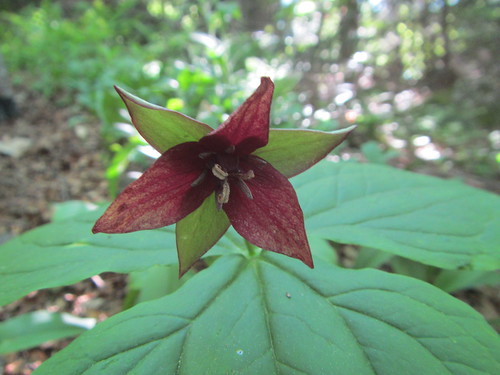 After enjoying the view at Geiger Point, one of only three the day offers, we then lost all that elevation we had gained by heading down to Diamond Notch Falls (which the signs call Buttermilk Falls). Of course we dallied here for a bit. 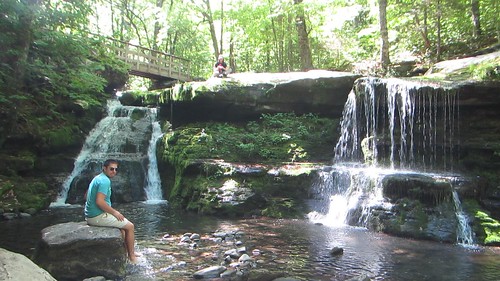 Up, up, up, but with not nearly as much scrambling, past the rock overhang, to the top of Westkill. 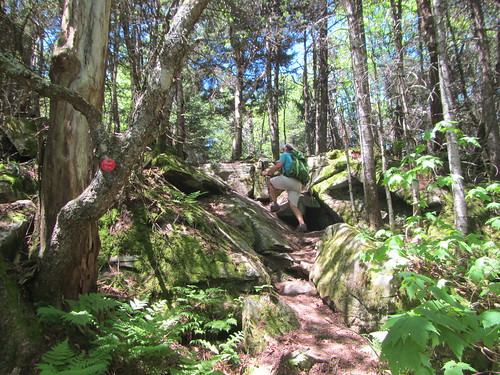 From the Buck Ridge lookout near the top, you can see Hunter and Southwest Hunter (pictured) as well as Thomas Cole, Blackhead, and Black Dome. 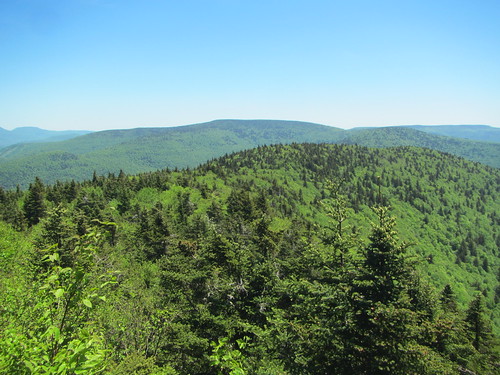 From there, it's ... mostly ... downhill. The exception is an elevation gain of about 300 feet to the top of St. Anne's Peak, one of the 100 highest. From there is really is all downhill.

The trail makes an abrupt turn to the north, into the second valley named Mink Hollow of the trail (seriously, people?) and changes a great deal in character again. For the final mile and a half, it's much gentler and the trees are mostly pine and cedar. 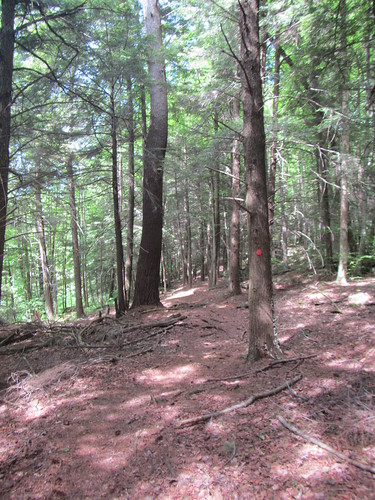 And then, we reached the end! 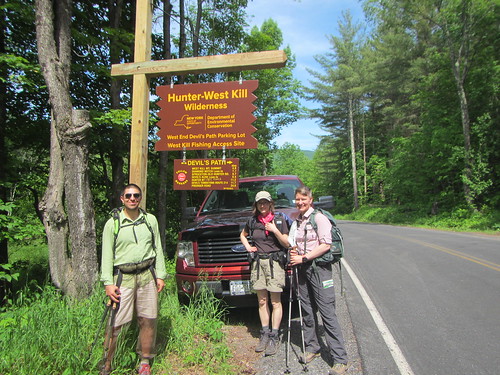 Posted by Eve Proper at 9:58 AM No comments: Links to this post

The Devils Path has been called the hardest hike in New York, which seems like a difficult thing to measure, but certainly if you are one of the people who decides to cover all 24 miles and 8,000+ feet of elevation gain in one day, congratulations, you're tough! For comparison, the RD and SBM end-to-end are similar distances, with about 6,000 feet of elevation gain each, but neither involve the kind of scrambling or rocky territory that are an inevitable part of any Catskills hike.

One can also do it as either a two- or three-day backpack, or you can do what we did, and slackpack it. This involves taking advantage of the trail's single road crossing at mile 13, which is at Devils Tombstone campground.

Now a bit of backstory: I planned far in advance and reserved a campsite in January, which was good because the DEC decided to close it for the summer to make improvements. Current reservations would be honored, they said, but there would be construction during the day, and neither the restrooms nor the water spigots would be available. This was fine with us.

It turns out that the vault toilets were still in operation, there was no construction on site, and they were still taking campers, just not with advance registration. The water was off and there was no caretaker. The campground was full anyway, because it was the weekend of the Hunter Mountain country music festival.

So we set up our campsite Friday night, shuttled one car to the western trailhead, and went to bed. The next morning we drove to the eastern trailhead and began. 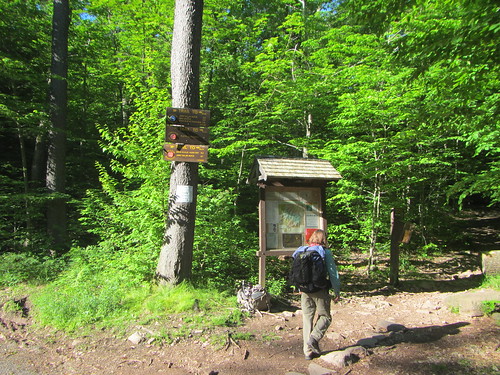 The very first mile and a half is misleading; it's a gentle approach that is out of character with the rest of the trail. It also bears east instead of west. Then the trails turns and begins its first uphill march. 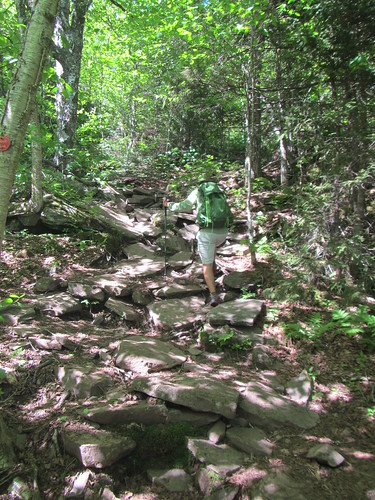 Indian Head and Twin were fine. By Sugarloaf, I was feeling it, and Plateau was tough. 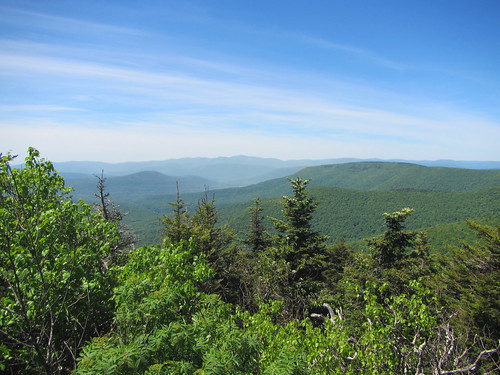 We were helped by having absolutely perfect weather - sunny but not too warm. 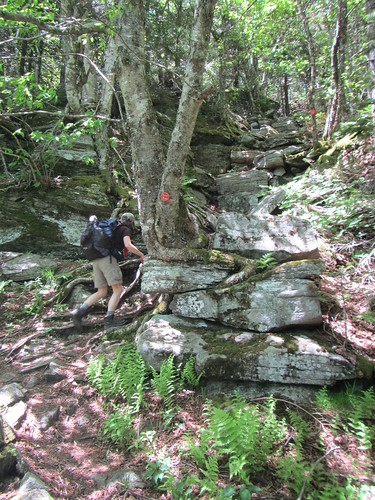 But we made it down to Notch Lake, where we had a short walk to our campsite. 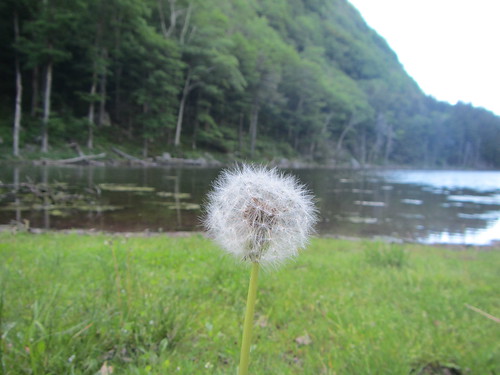 Posted by Eve Proper at 9:56 AM No comments: Links to this post

Sometime early on in my Catskills hiking, I inquired about Huckleberry Point. Whoever I asked told me it wasn't all that great. So it didn't rise higher on my list of places to visit until recently, when other people told me, no, it really was nice. It seemed like the perfect destination last Friday, as we wanted a relatively easy dayhike not far from Devil's Tombstone. 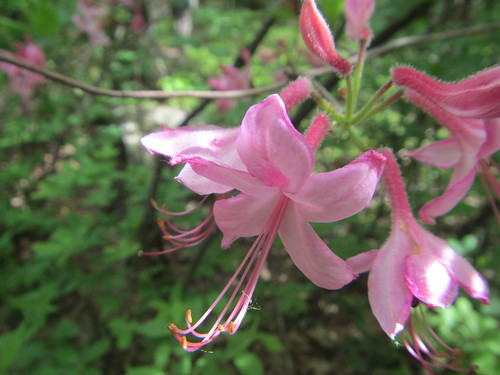 The first part of the hike I have done previously; it is also one of the ways to Kaaterskill High Peak. This part of the trail is on an old road and is not difficult at all. Then the trail to Huckleberry Point splits off to the right and proceeds to gain and lose elevation for a little over a mile. We walked through azalea (which smelled wonderful) and laurel (not in bloom yet) to arrive at the point, which is an overlook of mountains and a valley. 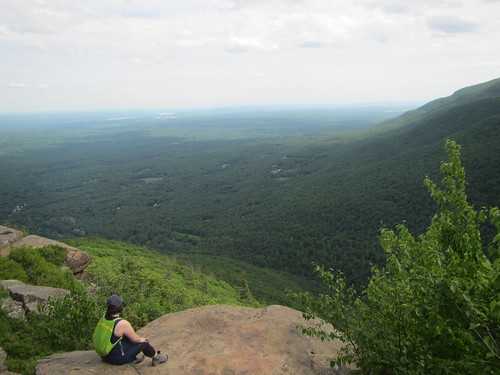 This is a one-way hike, so you return via the same 2.4 miles to the start. (One could also turn and continue up to Kaaterskill, of course.)
Posted by Eve Proper at 9:29 AM No comments: Links to this post

Hiking near the Old Croton Aqueduct

Another Ramblers hike near Ossining and Croton: 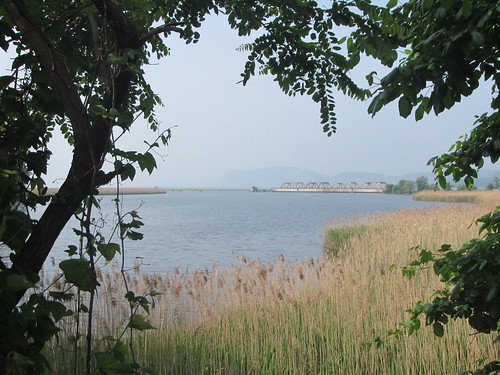 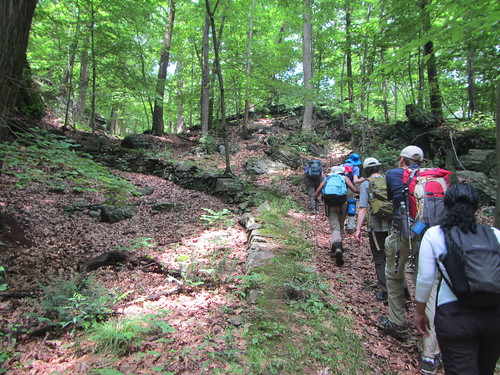 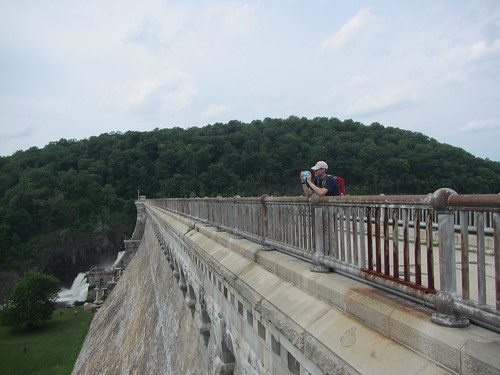 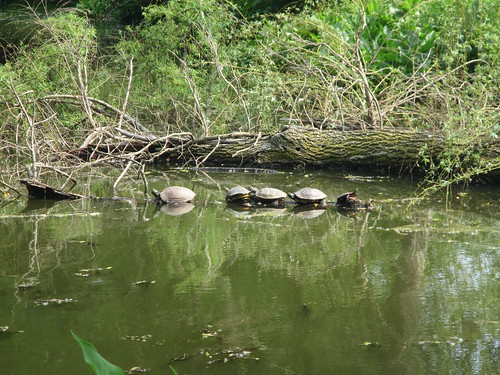 Posted by Eve Proper at 6:25 PM No comments: Links to this post